There is something special about meal time when you are camping – the food always tastes better! There are several methods for campsite cooking, but one of the best is cooking with a dutch oven. One pot meals are my favorites, and a dutch oven for camping makes this easy. Who needs the slow cooker when you have a dutch oven outside?

We were first introduced to dutch oven cooking years ago while camping with my son’s scout troop. It was so much fun (and umm… interesting) to sample the boys’ dutch oven recipes during their cookoffs!

One of the easiest ways to ensure success with dutch oven cooking is to get a quality dutch oven for camping.

This post contains affiliate links. You can read my full disclosure here.

If you just want to cut to the chase and skip my product info, you can’t go wrong with this best selling dutch oven. It is a favorite with campers and will last for years.

There are several kinds of dutch ovens available, but a few things set apart dutch ovens for camping versus one for the home.

In my opinion, a cast iron dutch oven is the best kind of dutch oven for camping. When properly cared for, it will last for years. It is a good heat conductor and retains heat for a long time. The only disadvantage is that it is heavy!

A good camping dutch oven will have 3 legs on the bottom of the oven. This is great for cooking over hot coals.

Another option you will want to look for in a good camping dutch oven is a deep rimmed lid. This enables you to place hot coals on top of the lid, ensuring more even cooking. Some people also cook on those lids.

Tip: Several brands make special edition dutch ovens i.e.National Parks, Boy Scouts etc. or have designs on the lid. Although these are neat, these designs may make it a little harder to clean the coal ash off the lid. This is not a deal breaker, but something to keep in mind before purchasing.

Now that you know the things I think make a dutch oven best for campsite cooking, lets look at the best dutch ovens for camping! Most of these pictures are clickable if you want more product info and want to check prices and reviews.

The Lodge name is famous in cast iron cookware. American made for over 100 years (first foundry opened in 1896 in Tennessee), their products have withstood the test of time. They manufacture a variety of dutch ovens in several sizes -perfect for individuals and large groups.

✔️ The original Lodge Camp Deep Dutch Oven is my top pick for the best dutch oven for camping.

It has all of my requirements for a good camping dutch oven – a flanged, deep lid for hot coals that does double duty when flipped and used as a griddle, a handle, legs to hold it above the coals, and it is pre-seasoned cast iron.

It is deeper than other models, which is great for a large roast or ham and big batches of stew. It is available in a smaller 5 quart model, the popular 8 quart (the best deal!), and a big 10 quart.

Tip: The Lodge Camp Dutch Oven Camping 101 cookbook is included with this purchase!

The 12 inch, 6 quart size is a great size for many campers. It is big enough for a family but not so huge that it is cumbersome to pack and carry. A 10 inch, 4 quart model is also available. Looking for a small dutch oven for an individual or side dishes? Check out the 2 quart cutie.

This model is similar to my top pick; it just isn’t as deep.

Camp Chef was established over 20 years ago with the belief that there was a better way to cook outdoors. Camp Chef offers more than dutch ovens – they have smokers, outdoor ovens, griddles and more. They also have a National Park dutch oven/skillet set.

⭐️ The Camp Chef 6 Quart Deluxe Dutch Oven is one of the best values in camping dutch ovens.

This 10 inch dutch oven is a great value if you are on a budget. It is approximately $20.00 cheaper than the Lodge dutch oven, plus it comes with a lid lifter and starter booklet. A neat feature of this dutch oven is the legs on top of the lid, making it easy to flip the lid and use it like a skillet over coals. Check out these great reviews!

This dutch oven is also available in a huge 12 quart model that is perfect for large families or groups.

Tip: Dutch ovens are heavy! Be careful lifting by the handle. The pot can tilt and “rock” slightly.

This Bruntmor dutch oven is an affordable option for your first dutch oven or even a second one to be able cook dessert at the same time! It too has the deep, flanged lid. According to Bruntmor, their cast iron is pre-seasoned with their “Deep Seasoned Finish” that provides a natural, easy-release surface that is ready to cook on. It is available in 6 quart and 8.5 quart models.

This 4 quart dutch oven is sized just right for a couple or small family at a good starter price. If you want a larger one, it is also available in 8 quarts. These are traditional, old fashioned dutch ovens – they are not pre-seasoned. You would need to season this dutch oven yourself before using it.

Looking for your first dutch oven that is easy on the budget? This AmazonBasics 6 quart dutch oven may be for you.

Yes, it is a “generic” brand and yes, it is made in China like many of the less expensive dutch ovens, but it is almost half the price of the Lodge 6 quart dutch oven.

It is pre-seasoned, has a deep flanged, smooth lid, and is backed by AmazonBasics’ limited 1 year warranty

A few of the negative aspects in choosing a less expensive dutch oven boil down to the same concerns. These dutch ovens are usually made in China, they may have poor casting flaws in the interior of the dutch oven – pitted, scratchy surface etc., and the lids may not seal as tight as like the Lodge brand.

These “flaws” may be minor to you. Just like any gear, there is always a product that may be better. But I understand that buying the “best” may just not be in your price range. Or maybe you will only be using a dutch oven occasionally and see no reason to spend more than you have to.

If you are on a tight budget, I would purchase a cheaper dutch oven rather than miss out on dutch oven cooking when camping.

Keep reading….I have some more goodies for you!

Though not 100% necessary, there are several dutch oven accessories that make campsite cooking much easier and safer.

If you plan on cooking with coals, you’ll want a charcoal chimney starter. You can light charcoal without starter fluid and the coals will be ready in about 10 minutes or less. It really speeds up the process.

This super affordable chimney is a basic, no frills design. It is also available in an electric model that uses an electric coil in the bottom to light the charcoal, but I would not recommend that for camping.

This best selling chimney utilizes starter cubes or paper in the bottom for a rapid fire start.

After trying to grasp the small handle on top of my dutch oven lid wearing an oven mit, I knew I needed a lid lifter. This simple tool makes a world of difference lifting and moving a hot dutch oven lid.

The Lodge 4 in 1 Tool is a great lid stand ( you don’t want to set your hot lid in the dirt ), plus it is multi functional. The only disadvantage I can see using this as a lid lifter, is that it isn’t very long and may place you hand closer to hot coals on top of the lid. Check out this video to see this little gadget in action!

A pair of tongs come in handy placing hot coals on your dutch oven. Just be sure to get tongs long enough to reach into your charcoal chimney  – many prefer at least 16 inch tongs.

A mini table for your dutch oven! This stand is perfect for getting your dutch oven off the ground, especially if you are camping where there isn’t an established fire ring and you want to practice Leave No Trace principles. It can also be used on top of a table, bringing your dutch oven higher so you aren’t bending over. You place the hot coals on the stand and just set your dutch oven over the coals.

Some people prefer a camp table with longer legs. These tables will usually hold two dutch ovens side by side. They are nice, but cost more than the stand and take up more room to transport. My son’s scout troop used them often, and they are convenient to have at the campsite.

If you plan on cooking over a fire with your dutch oven, a tripod is the way to go. Most have a S hook on the chain so you can adjust the cooking height, but tripods come in different sizes. Check the height of the tripod you are considering and read the reviews. The Stansport tripod is a best seller, but some people think it is too short.

You can just use your spatula to scrap it clean. Keep in mind, the scrapers designed for cleaning dutch ovens are shaped so they reach the bottom and sides well. And they only cost a few dollars!

This scrubber is becoming popular with cast iron fans. Check out the reviews though. Despite tons of 4 and 5 star reviews, some people have damaged their cast iron with it.

Hoping to have less of a mess to clean? Try using dutch oven liners. I have used these Lodge liners before. Foil liners that fit into your dutch oven are also available in several sizes.

I love this handy charcoal guide. It helps you determine and adjust the temperature of your dutch oven by added the correct amount of charcoal. It is a magnet and weatherproof so it will last longer than plain paper with your camping kitchen supplies.

Do you want more campfire cooking equipment? Check out this post:

The Campfire Cooking Equipment of Your Dreams

As you can see, there are several dutch ovens that are perfect for camping to choose from. I think any one of these will be fine to get started cooking your favorite dutch oven recipes. Let me know which one you picked! What do you love ( or yikes – hate!) about it? 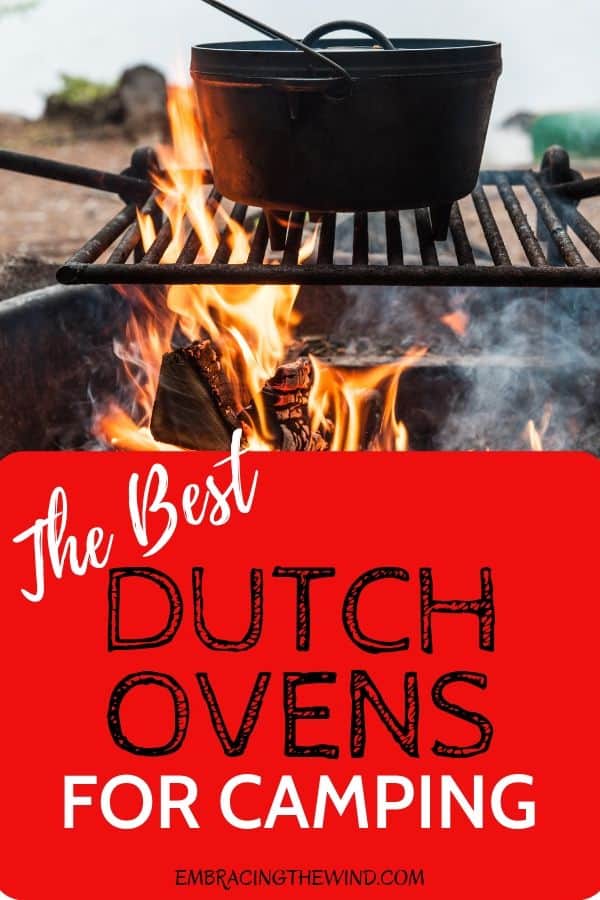 4 thoughts on “The Best Dutch Ovens for Camping”

AS AN AMAZON ASSOCIATE I EARN FROM QUALIFYING PURCHASES